St Paul is the greatest missionary of Christianity. Born as Jewish in Tarsus and named with the ancient Hebrew king Saul. He was circumcised at eight-day as stipulated by the Jewish Law. Paul was reared following the Pharisaic interpretation of the Law in all respects.

St Paul as a Jewish and His Conversion 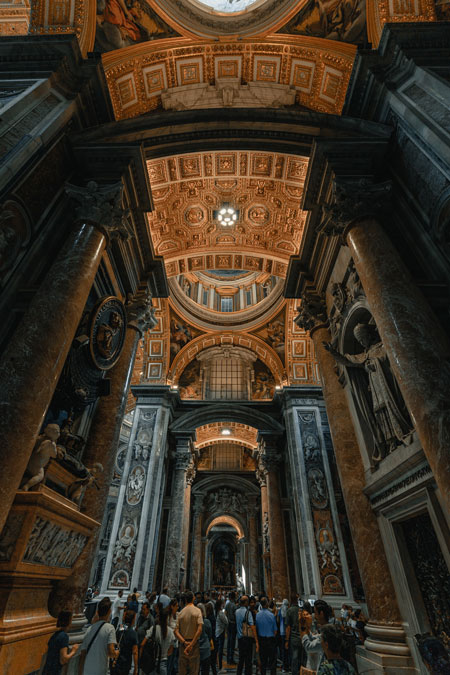 As a young Jew of the Diaspora, Saul took as his familiar name the Latin Paul, a name with a sound similar to his Hebrew birth name.

Paul’s characters show a keen knowledge of Greek rhetoric, something he doubtless discovered as a youth in Tarsus. But his patterns of thought also reflect legal training in the Jewish Law as preparing for getting to be a rabbi may be obtained in Jerusalem from the famous educator Gamaliel, the Elder.

By possessing account, Paul exceeded expectations within the ponder of the Law; his enthusiasm for it drove him to persecute the Christian church, holding it to be a Jewish faction that was unfaithful to the Law which ought to be hence annihilated. Acts portray him as a supportive witness to the stoning of St. Stephen, the first Christian martyr.

Paul became a Christian after encountering a vision of Christ during a ride from Jerusalem to Damascus. Paul describes this event as not a term conversion, which implies a loyalty from one religion to another.

He becomes aware cleary the revelation of Jesus Christ to mark the end of all the religions and thus of all different beliefs.

Instead, Paul consistently spoke of God’s having called him Christian and needed to be an evangelist to the Gentiles.

He was faithful to the mission of Jews Legitimacy, but he was convinced that Christianity was a God to all in the world and that God was making this call apart from the Jewish Law requirements.

According to the Acts of the Apostles record, Paul has carried out three well-defined missionary journeys.

Paul was imprisoned in Jerusalem after riots instigated by his Jewish opponents, and he was eventually brought to Rome; Paul also mentions the danger of his death in Acts. He was most likely assassinated in Rome in the year 62; Christian tradition from the fourth century dates the execution to February 22.

Paul’s name appears as the author of 13 letters in the New Testament, seven of which were nearly likely written.

In which Paul periodically speaks of his personal experiences and activity, these letters are the primary source of information on Paul’s life. Most academics focus on them and use the Acts of the Apostles as a supplement.

Every attempt to summarize Paul's thinking is hampered by the fact that each letter was sent to a specific church, and Paul felt compelled to tailor his teachings to that church's specific issues and faults. Even Paul's most methodical epistle, the letter to the Romans, falls short of providing a thorough exposition of Paul's theology.

Even Paul's most methodical epistle, the letter to the Romans, fails to provide a thorough exposition of Paul's theology. On the other hand, specific topics and ideas frequently appear enough to be regarded as the basis of his thinking.

Paul consistently accepts the main temporal structure of Jewish apocalyptic thought, which hypothesized two ages: the Old Age, which is under the rule of Satan and his legions, and the New Age, which God will inaugurate by his superior might at some point in the future.

Although Paul thought that God's sending of his Son, Jesus Christ, had begun the New Age, he also felt that the Old Age had not yet been eradicated with its forces of sin and death. On the other hand, he was confident that the two ages were locked in a battle, as evidenced by the fact that death's power had not yet been shattered.

On the other hand, Paul saw the apocalyptic struggle's eventual outcome as inevitable because God delivered the final blow for freedom (as paradoxical as it may seem) on the cross—the point at which the powers of the Old Age appeared to have gained a massive victory.

He blamed the crucifixion on "the rulers of this age," a phrase that referred to both the political authorities and the demonic forces at work inside and through them (see 1 Cor. 2:8).

These rulers had only just won, for by crucifying the "Lord of Glory," they had secured their own doom (see 1 Cor. 2:6).

According to Paul, when the crucifixion is truly understood, it displays God's peculiar might, a power perfected in weakness. By resurrecting Jesus from the grave, sending the Holy Spirit, and thereby establishing the church as the foundation of his New Age, God confirmed his power.

As a result, the church was thrust into the eschatological conflict, with the faith that God would soon send the rising Lord to bring the fight to a triumphant end.

Paul used earlier Christian formulations that concentrated on a sacrificial perspective of Christ's death (for example, 1 Cor. 15:3), but the core of his Christology is the claim that God has made Christ the conqueror over the power of sin.

Paul did not call on his hearers to repent of specific sins, rejecting the prevalent Jewish-Christian emphasis on repentance and forgiveness of sins. Instead, he heralded God's victory over all evil in Christ's cross.

These beliefs have complicated implications for Paul's view of the Law. He regarded the Law to be holy, just and pleasing before converting to Christianity, but he no longer believed it to be powerful enough to defeat sin and death (see Rom. 8:3).

As a result, one cannot rely on it. Indeed, anyone who tries to rely on it will discover that the Law can become an enslaving power in the hands of sin (see Gal. 3:23–25).

The View of Human Beings

The use of the terms body and spirit has been misconstrued more than any other aspect of Paul's thought. These are not simply the parts of a human person; they were clashing spheres of power for Paul because the realm of the flesh (the human realm) is susceptible to the power of sin.

The answer to evil is not a system of ethics that individuals can be urged to follow, but rather God's gift of the Holy Spirit, who prevails in the new community's existence by bearing love, joy, and peace.

St. Paul as Christianity from Judaism

As previously stated, Paul did not speak of deciding to convert from Judaism to Christianity; rather, he spoke of being "called" by God. Because he basically said the same thing that I did other Christians, it is clear that Christianity begins for him not with something individuals chose to do, but with something God has already done through the revelation of his Son and the sending of his spirit.

Based on his own self-administered Grace, God has called and continues to call people into the Christian community. Paul's emphasis that God has fixed the ungodly via Christ's death demonstrates the radical nature of God's power (see Rom. 4:5).

Humans do not need to perform nice deeds for God to fix them. God, on the other hand, has taken the initiative.

As a result, Paul considers faith a gift from God rather than a discrete and actively designed human action (see Gal. 5:22). Faith, like life itself, is something that God creates (see Rom. 4:17).

As a result, Paul sees everything as dependent on God's compassion rather than the individual's will or effort (see Rom. 9:16).

It has long been assumed that other theological beliefs quickly overtook Paul's ideas. Only St. Augustine in the fifth century and Martin Luther in the sixteenth century were able to reclaim them (and by them only in part).

This viewpoint is currently being reconsidered. Despite the author of 2 Peter's admission that understanding Paul was difficult (see 2 Peter 3:16), various groups in the late 1st and early 2nd century maintained Paul's letters and tried heroically to apply portions of his ideas to the new situations faced.

Ephesians, Colossians, Timothy 1 - 2, and Titus are some of the most important books in the New Testament, all mirror Pauline communities. However, indeed, it was not until Augustine and Luther's works that a full and persistent engagement with Paul's theology was attempted; in the twentieth century, the work of German theologians Karl Barth and Ernst Käsemann has reignited interest in Paul's theology.